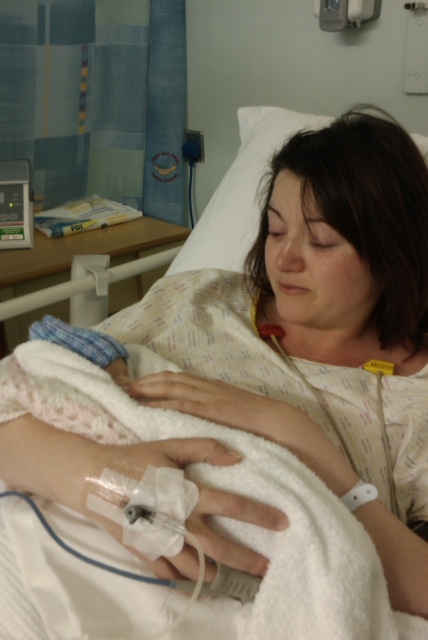 The above photo is of me holding my beautiful baby daughter, Matilda Rose. It was taken about half an hour after coming out of theatre where she had been delivered by emergency, crash C-section. She’d been alive just half an hour before. The fantastic team did their best, but she couldn’t be revived. It’s one of my favourite pictures, because i look like a really mummy in it. I look like someone who just had a baby, and if she’d been delivered a little earlier, I might have been one of those mummy’s with balloons and cards and a going home outfit carefully chosen. The day I walked out of hospital without her was by far the worst day of my life. It felt completely unnatural. Even the day light felt wrong. It felt like the world should have stopped right there.

It’s Baby loss awareness month. Baby Loss Awareness Week runs from 9th to 15th October, but the whole of October is given over to raising awareness of miscarriage, stillbirth, neonatal loss, baby loss in general. I have always tried to be open and honest about my own experience of stillbirth and miscarriage and the special sort of grief that comes with being infertile, a type of loss in itself. Sometimes I want to talk and talk about it all, to anyone, a sort of purging of it all. Sometimes I will be recounting our story and I find that I am punctuating it with ‘I can’t believe this happened to us’ , because I can’t, still. I am one of those tragic parents whose baby died because of mistakes in her care. I am one of those ladies whose stories I used to read in newspapers, magazines, the ones where I would feel awful for them, I’d shake my head and frown and sigh, then turn the page and read the next thing. But I can’t ever turn the page now. I am flattened out into a story of grief and death and twelve years of trying for a baby and five rounds of IVF and a stillbirth and two miscarriages and I cannot. believe. this. is. me. Sometimes I just can’t even bear to talk to anyone because it’s too hard to be surrounded by other people’s families, all moving on and being set free whilst I am this rock in this river. I don’t wish them ill, I aren’t jealous, not exactly, I just have been placed outside of everything by what has happened, and I feel it quite acutely, it feels like having an open wound and it’s sore. Sometimes I think I am done with grief and loss and have finally moved on and I don’t really feel much towards it, and then someone will make an off the cuff remark, or there will be a photograph or a ‘game’ on Facebook and it’s like being slapped. It’s like being put straight back into the dark days of grief.

As it happens today is exactly three years since we went along to Hull for a second scan, following the first one which had shown that our baby, our third pregnancy, didn’t have a heartbeat. This was our second miscarriage, and it was confirmed at this scan, I was given an appointment day to come into the unit and have the miscarriage induced as my body just did not want to let go. When I think about that miscarriage, I think it felt like the end of any hope or joy in fertility treatment, because the worst could just keep happening, and I knew that if we carried on, we’d be facing this over and over.

We’ve decided on just one more go, now, in 2016. I posted something about it on Facebook recently and had the loveliest response of support and kindness. Lots of hugs, lots of people telling me not to give up hope. I wish, I wish, I wish it was as simple as not giving up hope. I wish it was as simple as just facing a failed cycle, which is bad enough, but to be facing another miscarriage, another still birth, it’s too hard. And it’s not about admitting defeat, it’s about accepting that your life just won’t ever be that. And if the next IVF fails I will have all of Matilda’s things to sort out and give away or sell, those things we saved for ‘the next baby’ because there will be no next baby. And it will destroy me all over again.

I’ve decided to use this blog space to post a poem a day with a picture and a little bit about my experience as part of the Baby loss awareness month. There are thousands of women and couples who have lost babies at different stages, I would like for them to have a small platform in the month where all us spectres of baby death grief can come out and have reason to speak. We seem to have a lot of days and weeks and months that are about raising awareness, but I think this one is particularly important in that it isn’t just about raising awareness, it gives parents who have lost babies a chance to talk about their children, to talk about their experiences and a reason to do that.

Generally it makes people uncomfortable to see pictures of dead babies, or to hear stories of still births. But what people don’t realise is that stillborn babies are still babies, still bundled up in pride and love from the parents. I can’t count the number of times I have seen pictures of people’s children on Facebook and wanted to share my own. Or wanted to add to a conversation about pregnancy something lighthearted about morning sickness, knowing that I can’t because everyone knows that I didn’t take my baby home, so all the talk about swollen ankles and puking out of car windows is somehow darkened and tainted, there is death on it. And people don’t like death. but My daughter was beautiful, my pregnancy was real and my baby might be dead, but I feel the same towards her as any other mum does. It’s just all different too. For months after she was buried I fretted that she would be cold in the cemetery. I fretted that the morticians wouldn’t hold her properly. Worse, I worried that they would be talking about what they’d done at the weekend while they cut her, as if she wasn’t there. I could cry now, that feeling of needing to protect her never went away. It still hasn’t.

Here is a link to a charity called Count the Kicks, it’s an organisation that aims to empower women when they are at their most vulnerable, when pregnant. They give brilliant advice on recognising reduced foetal movements. If I’d been listed to about Matilda’s reduced movements, there is a very good chance she would be here now, so as you can imagine, it’s very close to my heart.
This is my way of marking baby loss awareness week. I’m going to post a link every day to a different charity or organisation too, so that they might benefit. The poems won’t all be mine, I am busy getting permission to post some poems that are beautiful in their truth, but since it’s the 3rd of October already, I shall start with one of my own from my current pamphlet, Lapstrake, published by Flarestack Poets. This poems are from a series of poems about the grieving process.

And her Great Gift of Sleep

Shipwrecked on the bed, I feel for her;

her tidal shifts, the turn, the underwater

the bubbles; the dulled sound of inside

sounds is receding. She is drowning.

and flexible, my squid, my jewel

in her mermaid’s purse with her tiny feet,

that are a perfect miniature

of my own, has stopped nudging me,

at the window, listen

for the sea, breathe

this moment is washing

right through me. This moment

and the moments to come

a tide drawn over and over

by our lunar child, her death gravity so great

that it will drag me

back and forth for years.

I dream the sea

and the tide line

is scattered with her clothes.

Exploring the World of the Brontës, their Juvenilia, and Brontë Inspired Literature